Lionel Messi Breaks Down In Tears During His Farewell Speech 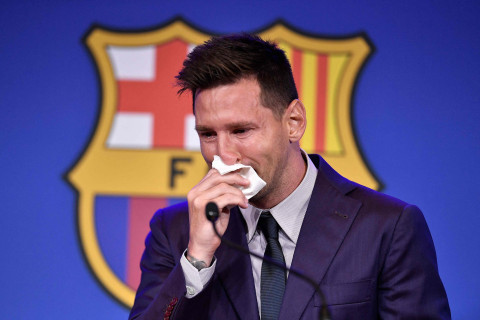 Lionel Messi broke down in tears during his farewell speech to FC Barcelona fans. In his farewell speech, Lionel Messi confirmed his departure from Barcelona. He said there is "a possibility that he will move to Paris Saint-Germain, although nothing has been agreed between him and the club." Messi is ending his 21-year contract at FC Barcelona, which was unable to give him a new deal due to the salary cap in the Spanish league.

The 34-year-old six-time Ballon d'Or record winner is now a free agent. Messi said, "My family and I were convinced that we would stay here in our homeland," "This is the end of this club, and now a new story begins. Yes, this is one of the most difficult moments for me," he said.

"I don't want to leave this club - I love it, and this is a moment I didn't expect.”Last year I wanted to leave. This year I wanted to stay. That's why I'm so sad. "It was like my blood froze in my veins. I was really sad. It's been really difficult until now. I'm still trying to process it all." "When I get home, I'm still going to feel bad; it's going to be worse. I'm not ready for this."

Lionel Messi won 34 trophies with Barcelona after making his first-team debut in October 2004 at the age of 17. He scored 672 goals in 778 games and helped the Spanish top club win 34 trophies, replicas of which were shown at the press conference.

"I am so grateful for the love everyone has shown me, for all my teammates, and for the club that has stood by me," he said. "Today I have to say goodbye to all of that.

"I came here when I was very young, 13 years old, and after 21 years I leave the club together with my wife and my three Catalan-Argentine children.”I can't be more proud of everything I've done and experienced in this city. I have no doubt that in a few years we will return because it is our home.